Andy (Darkerview.com) and I attended the 17th Annual Hakalau Forest National Wildlife Refuge (NWR) Open House that was held on Saturday, October 17th 2009! A PDF of the Open House News Release from the U. S. Fish & Wildlife Service showed how to get there and what to see when you get there.

It is my understanding that the NWR will continue to hold one of these every year. I am anticipating attending the open house again next year! I still need to get to the greenhouse to explore the seedlings that they are propagating to bring back endemic species like the Koa tree (Acacia koa) while they eradicate the invasive plants.

Mana Road resembling many 4-Wheelin’ roads taken in Arizona, except for the fog, the drizzle; and the intensely green foliage of the all too Common Gorse.

Except for the dense fog, heavy drizzle and generous amounts of green foliage, the bumping bouncing drive to the event was reminiscent of many of the roads that we explored in Arizona with the same 4-wheel drive. For the first few hours of our visit to the reserve, the sky was overcast and drizzly; and the sun was barely able to light the landscape through the fog.

When we finished our hike on the birding trail and turned around at the quarry, it was as though we had stepped through a vortex or into an alternate dimension as we began our hike back to our vehicle to eat our lunch and then head for home 🙂

The road started as a narrow, graveled and tolerably maintained course; and then took on a different character as it changed to steep, well rutted stretches of trail among the curves and hills. The sections that were most susceptible to erosion were paved to prevent complete washout and inaccessibility to the refuge and the nearby ranches.

We took our time on the drive in to take in the beauty of it all, despite the heavily invasive, and thick growth of that pretty yellow flower on that bushy evergreen plant that I now know as Common Gorse (Ulex europaeus). It was EVERYWHERE!

An invasive in Hawai’i. Gorse is so dense that it chokes out nearly every other plant in its wake. While Gorse may have its place in the RIGHT place, its attempt at world take over is better left out of Hawai’i.

The backside of Pua ‘Akala Cabin & remnants of garden furrows.

The Gorse that was so prolific on both sides of the nearly 16 miles of Mana road, basically disappeared when we turned in the gate to Pua ‘Akala Barn and event parking. Eradication of the Gorse and reestablishing Koa trees is part of the mission of Hakalau Forest NWR as well as preserving endangered native species (See Management for detailed information).

While on the refuge grounds, I noticed only one pitiful instance of Gorse that was showing signs of giving in to the eradication effort. And numerous young Koa trees getting their roots established!

The effects of raindrops on my lens: An old tree in Hakalau appears to protect Spirits.

When we reached the main demonstration area, we started with the barn area where there were storyboards, pamphlets, and loads of information about the reserve. Then we moved on to the historic Koa wood Pua ‘Akala Cabin (built in 1883 and used up until about 1980), and the equipment shed that was very near the cabin.

It was wet and overcast during our exploration of the buildings (the cabin with its temperature controlled fermentation room and the barn with a unique water catchment system). This provided a diffuse lighting and prevented harsh shadows; although, it was quite the challenge to get an acceptable photo before the lens was covered with water droplets.

After the barn, the cabin, and the equipment shed had been thoroughly explored, we headed down the birding trail. The freshly mown, very wet grasses strewn about the ‘lawns’, gardens and the trail, were readily sticking to shoes, socks and pant legs. The trail was a relatively easy hike with decent footing down an access road for the refuge grounds.

‘I’iwi or Scarlet Hawaiian Honeycreeper (Vestiaria coccinea). Can you see it?

Not terribly steep; but at about 6,000 feet elevation, the air was a bit thinner than I am used to. This, however, did not diminish my enjoyment of the event! I viewed my first good sightings of ‘I’iwi or Scarlet Hawaiian Honeycreeper (Vestiaria coccinea), and ‘Amakihi (Hemignathus virens) as they flitted through the branches and flowers of the trees and bushes!

Every step of the trail produced another picture of green, whether it was a moss laden tree or grasses heavy with crystal look water droplets! I managed to get one picture of some red ‘I’iwi that you can hardly ID; and my picture of an ‘Amakihi became a pretty photo of a red tree blossom as it jumped behind the blossom just as I pressed the shutter release 😮

Despite the speedy feathered attractions being so elusive for photos, I added several to my ‘life list’ of bird sightings; and had many new bird calls pointed out by the guides! We reached the quarry and turned around to begin our walk back up the trail. The trail made a complete change as the clouds drifted away while the sun shining on all of the plants made the water drops glisten; and the green of the moss covered trees became brighter.

It was a whole different trail than we had come down!

“Am I on my mark?” Nene or Hawaiian Geese (Branta sandvicensis)

Once we got back to our vehicle and had eaten our lunch, the resident Nene or Hawaiian Geese (Branta sandvicensis) presented us with a well choreographed show. [Andy has posted that story at Darkerview.com.]

In addition to numerous Nene photos, I was also lucky to capture a quick photo of some An Enthusiastic photographer and a Professional photographer (Fanaticus photographer et Professio photographer) catching the Nene performance on camera! Do you see Nene watching from the background? <----- Note: —–> Distance between the photographers and the entertainers is not to scale … as close as they were, actual distance would still not fit on your screen. 😉 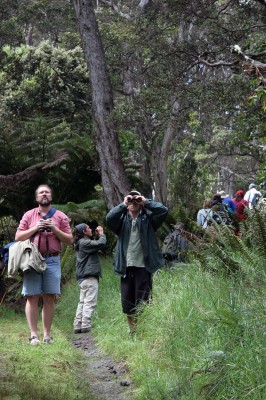 Hmmm … All of the mist we slogged through, the Flora we learned; and the rare Avian we added to ‘life lists’, this day was FAR from Fowl’d!!!! 😀