My friend, Dean Salman (http://www.greatscenery.com), captured this GORGEOUS photograph of a Yarrow’s Spiny Lizard (Sceloporus jarrovi) near the summit of Mt. Wrightson while hiking on October 11, 2009!

This link to the Online Field Guide to The Reptiles and Amphibians of Arizona Website by Thomas C. Brennan, has some extensive information about them, as well as many others found in Arizona.

While occasionally found at elevations as low as 4,200 feet, these all-too-tame lizards are usually seen between elevations of 5,000 – 10,000 feet. It was a young one of these interesting lizards that Andy had to help me remove from my left index finger in our backyard at Sycamore house in Tucson, Arizona in early 2005. 🙂

It was acting out defensively since it was about to be terrorized to death by Little Miss (A gray stray, outdoor kitty that adopted us in 2004); and I had just rescued it from her, so it didn’t make the distinction of threat versus safety. At some point, I hope to find the picture of it ‘latched’ onto my finger that was taken with a film camera and is now buried ‘safely’ in an archival file!?!… :-O

We are not sure how it came to be in our backyard; but our house was close enough to the Catalina Mountains that it is likely that it made a prior escape from a would be predator; such as, the avian type or of the human kind. It is an answer we will never receive… 😐

This is the BEST picture I have seen of this lizard to date!!!

At full scale, this photo makes this rather intimidating, but basically harmless lizard look even prettier and more interesting than I had previously considered! Thank you Dean for allowing me to use it in telling my story! 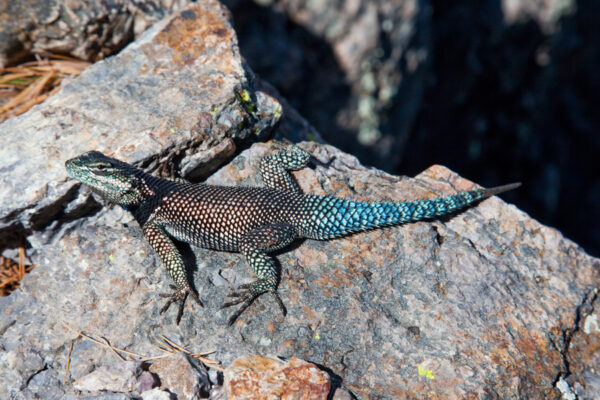