October 13, 2016:  Site Seeing by Boat – An Excellent way to view the Lava at its newest Ocean entry!

The night before; “I’m setting the alarm clock early enough to leave for Hilo by what time?” was my slow, incredulous question. When the answer was, “2:00 o’clock am,” I took a long pause to consider what that would mean for me 😮

Lava appears to have been reaching for the Ocean in among the steam and burbling water.

Then I thought, “Wait, Andy will be driving. I can sleep on the way!” And I Did! 😀 “To the Flow by Sea”, Andy’s recount of this drive to Hilo and beyond.

We left on schedule and arrived early to the meeting point. I slept some more while Andy walked around and took EARLY Morning pictures. He captured several beautiful pictures of morning light rising while we waited for the 4:30am meeting time…

Lava forging new paths on its quest to join with the ocean waters.

Three boats were backed up to the boat launch ready for boarding. Each with a capacity crowd. Each awaiting its turn with the mobile boarding steps. While we waited our turn to board our tour boat with Kalapana Cultural Tours, we were told some history of the Lava flow as well as some history of the park and area where we were. Sorry, I don’t remember it well enough to attempt to pass it on; but Andy does at Darkerview.com

It is our turn to board our boat. Wait. It just occurred to me. We board the boat BEFORE it is in the water? This was a first for me! However, it was a necessity due to the nature of this particular boat “ramp”. We are all on and sitting safely in our seats. The boat trailer is backed carefully into the water and we are afloat!

The boat is small but very stable and fast. We are at the Lava Entry quickly. In the very dim of not-quite-dawn, the Lava flowing over the newly created land edge was a very bright Orange-Red; and the steam roiled into the air where water met with “fire”!

In the low light of morning, Lava falls pour over land’s edge into the Sea.

The air was cool until we reached the area near the flow where we observed and took pictures. Then the light sweater wasn’t needed for a while. The water was even VERY warm to the touch. Little explosions were frequent as pockets of heat and gas hit the water leaving large chunks of lava floating, steam still billowing from them.

The boats all took turns at the different view points. On occasion, we were nearly in the plume itself. It smelled strong of sulfur and felt like a sauna. When I looked closely at the water while under the plume, I could see glistening flecks that would disappear as the boat moved in the water. They were minuscule bits of glass from the Lava explosions.

It was a GREAT Time! The boat and crew made even the “getting there and back again” enjoyable for me! 😁  I want to do it again! 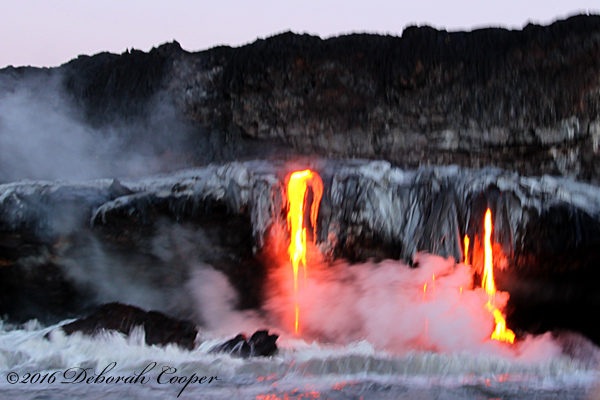 Lava cascades into the ocean sending plumes of steam into the air.

Darkerview.com Posted Links to video that we were part of on our Lava Boat tour Titled: “Caught on Video at the Lava”