Yep, I am migrating my Blog from my Previous Software (PS) to WordPress. My PS had failed to save my works-in-progress WAY too many times. 😡

I have abandoned it now and use it to get the transfers to WordPress accurate.

You have probably noticed (or will notice, soon) that my old Blog is somewhat “interesting” now (or you get forwarded automatically).

When my account was updated to work with WordPress, something in my PS did not like the change. 😐

Result: Some miscellaneous characters; and most important, it will not let me post, edit, delete or even access my admin pages.

My new Blog URL is www.gadgetgypsy.com/wordpress.

I like the layout of my new blog; although, little adjustments are inevitable along the way! What do you think?

Well, not being able to access the admin will make my progress a bit slower while I reformat my entries and put them back together; but it will not stop me!

I am publishing them with their original posting dates so that will take some time, as well.

Don’t let the “fine-tuning” scare you away, though. I will publish a new post every now and then to keep things interesting. In a good way! 😎 You may even see something old that is new again! 😉

No, no telescopes or new phones this time … 😀 …

It’s an Embroidery/Sewing Machine and the company of one or both of my Sew Helpfur, Clever Kitties: 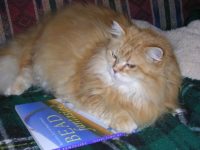 “Yes, it is Purrfect color combination” 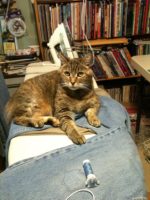 “Yes, the placement looks good, but…”

In reference to reviving a favorite set of Sun Shades for my Car:

MY SOUL, you ask?
A Stitch in Paradise Saves Mine!!!!!

A new interest (and now a hobby) in Machine Embroidery; and a simple, yet capable Embroidery/Sewing machine as well as the assistance of two very helpfur Kitties:

And thus it all began… My obsession with Machine Embroidery and Material Belongings Revitalization! 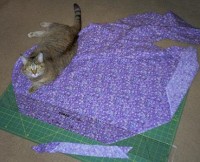 “Now, it is Purrfect!”
I was once told that ‘No outfit is complete without the Cat Hair’! 😉

They began to succumb to the pressures of the vehicular “Greenhouse” effect that had been initiated long ago in Arizona. As the material deteriorated deeper and deeper into a fragile state that would not support the spring tension any longer, and the Duct Tape was starting to cover more of the shades than the material;

A Reconstruction project to make useful again and not give up a good “friend”.

I stepped up efforts in looking for an answer as to what I could do to fix it. The spring-wire frames are still in great condition; and I am somewhat attached to the flames that were so fitting in Arizona’s “Dry Heat”!

I eventually discovered the Discount Fabric Warehouse (DFW) in Kailua-Kona. This discovery got me interested in sewing again and began my obsession with Machine Embroidery.

During one of my visits to DFW for supplies to embroider, I found the perfect material to revamp my Flaming Sun Shades from the plain back side and leaving the flames visible. Now I need to figure out how to sew it on the frames and it will still fold up into a nice neat package that fits under my passenger seat.

A bit of binding, a pretty print cotton cloth and stitching all around – these shades have a new lease on life 😀

Another few visits to DFW and I spotted the extra-wide double-fold bias tape. Three packages in black were chosen to be certain that I would have enough to bind both shades all the way around, plus a little more just in case I made a measurement error. I only needed two of them so one went in the materials on-hand drawer.

I had recently started using spray adhesives of varying permanency and used one that was removable as well as re-positionable if I didn’t like its angle or an annoying bubble formed. I now had all the parts and tools that I needed to revive my favorite sun shades!

After deliberating the process and procrastinating to delay the cutting of the fabric, I worked up my nerve to dive in with rotary cutter in one hand and ruler in the other 🙂 After washing the piece of fabric to remove the chemical sizing, and preshrink it, I looked it over to decide where I wanted the pattern to be cut. Then considered what impression that positioning would give.

Then the measure, measure, cut process. It all went quite smoothly and quickly after I finally started on it. I am very happy with the end result and I can put the flames in and the ocean scene out or vice verse! 😀 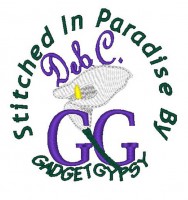 And thus it all began… My obsession with Machine Embroidery and Material Reassignment!