Michelle, my friend, Thank You for sharing this video! 🙂

You Tube Link to “Magnificent”

An AWESOME way to give back to the community and it was FUN!!!! Not to mention that it was cooler!

Cattle, Fog and a Pu’u as the last of the large animal life seen on our Thanksgiving Drive to the VIS.

Following our event filled drive up the mountain, we ate the Thanksgiving dinner of Turkey, Dressing, Mashed Potatoes, Cranberry Jelly, and more that was waiting for us at Hale Pohaku (HP) and then went to the Onizuka Center for International Astronomy Visitor Information Station (VIS) to assist with the public star gazing program until 10pm. 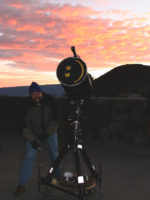 Andrew setting up a telescope at sunset in preparation for the public program on at the VIS on Mauna Kea.

Just as we finished our dinner and Andy was eating his dessert, he got a call to help troubleshoot an issue at Keck on the Summit. He helped them get it fixed quickly so we weren’t delayed in getting to the VIS by too much; and he made them happy.

Due to the number of clouds, we weren’t even sure if we were going to be able to see the stars and planets tonight anyway. When we got to the VIS, the ‘scopes were just getting set up; and the sky began to show promise.

I took several photos of the spectacular sunset and the process of setting up which included the volunteers, and the staff; and all the while, I was seeing small improvements in the condition of the sky where the clouds slowly began to disappear and more of the Milky Way and stars could be seen. 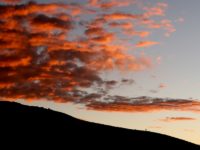 Treated to a spectacular Sunset on Thanksgiving at the VIS!

It cleared off so well that Andy was able to get some very good shots of the conjunction of the Moon, Venus, and Jupiter after he mentioned it several times leading up to the big day in his blog’s ‘Astronomy: Events‘ category. Just in case you are wondering, like I was at first introduction, “what is a Conjunction?” – check out this Conjunction entry at Wikipedia.

As I was processing the picture of Andrew setting up a telescope at the VIS and the sunset behind him, I came across a comment by John on Andrew’s posting about the “Conjunction forming a ‘Smiley Face’ on November 30, 2008”; and a link to some pictures of it.

Then I noted that the telescope’s corrector plate cover that Andy was setting up also had a ‘Smiley Face’ on it 🙂 I am confident that the clouds parted just for us this night!

We had a large number of people drop in and the telescopes as well as the gift shop and theater were quite busy until closing.

The night may have gotten off to a slow start; but it flew by without my even noticing the time until it was time to put up the telescopes, the gear; and go home. We LIKE to volunteer there for many reasons; but I think the biggest reason for me is to hear people exclaim, “WOW! I didn’t know there was soooo much up there to see!” or that first comment or question of the evening and usually from a child, “Where do you put the picture of that in the telescope?”

We then set about explaining that they are looking at the real thing in the sky, and we point it out with a green laser pointer right where the telescope is focused. The Green Laser Pointer sets off a whole new question set and we explain that it is a professional tool not a toy; but that they could become a professional in a science degree then they could get a green laser pointing ‘tool’, too 😉

While I was waiting for dark and the big scopes were being set up, I helped set up the Dobsonian telescopes then I took some flash photos behind the VIS that I think look kind of neat!

The sunset itself seemed to change as fast as I could blink. Some were saying that the color was due in large part to the amount of Vog in the air and the lack of trade winds at the time. As much fun as I was having with my eyes and sinuses, I was in agreement with them. 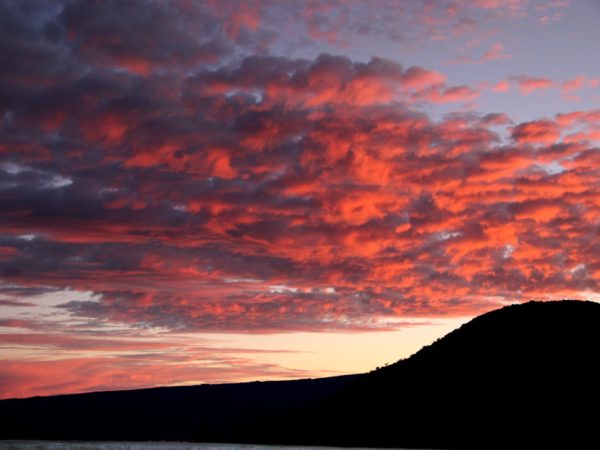 Waiting on the Universe… 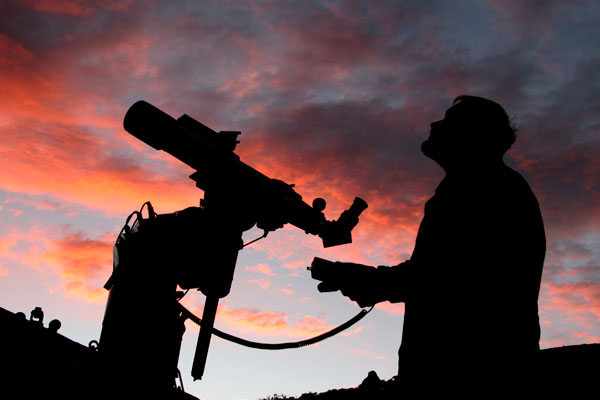